Maid cafe for a day~ a birthday

Spent a nice day at the maid cafe, would have been fantastic if there were more people and I apparently  missed a big event today >_< how sad!! It is my birthday dammit extend the event more... !! >___< ||| 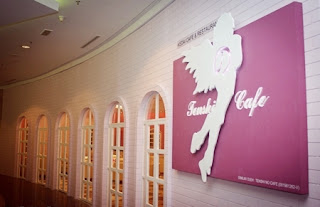 There were some cosplay and games thing looks like a big one too, or small, since I saw like... 6 cosplayers, one of those is a Miku from one of her music videos, I am guessing World is Mine, but I could be wrong. 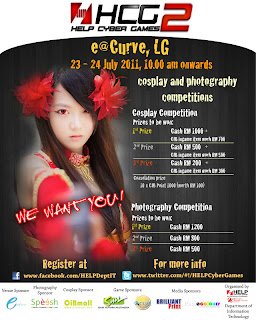 Special shout out and thanks goes out the very nice butler Gin-san and Akiko-san who seems so tired yesterday, must have been hard work desu-ne getting all the attention since you are the only maid around. Hope I wasn't being too annoying with you two for talking about me me me me and my director-san (about that onsen trip thing)


I am glad to have celebrated my birthday there, always nice to come here and feel very welcome. I am trying to escape the Arab season as you can see where I am from and where I work... oh dear, trailing off again talking about myself ahhhhh >___<
Anyway, I promised to give you guys a proper review so don't worry I will and it will be in the next post. I eat too little, wished I could have eaten more as this makes the second time I ate Omu rice (the last time was just dessert with some friends) Special thanks goes out to the sauce art by Akiko-san, you were so patient with making up my plate! I don't wanna eat the dish because you spent so much effort on it~! orz||| 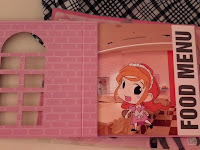 It is a pity Kurumi-san was not with us, I hope she enjoys her MTV event, say hi to her for me! (I really wanted to see her as ojousama again, but ehhh...) Thanks Gin-san for telling me, great service you and Akiko-san provide and let me tell you this, I recommend this to a lot of international audience, (if they share interest with me, and I really hope you guys advertise more.)

Anyway, I am heading back to Penang today, so Cassie hope to finally be able to see you there. 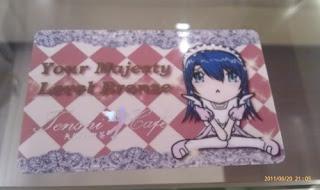 ahaha, I already have a membership card~ so yeah.

I have finally found a 3D waifu.

Is it wrong I am so jealous of her being seen by other young men like me? seeking to find one that they really wished were their own?

My infatuation at first, but... it has become a kind of love beyond my walls of thought.

oh dear....I think I am going insane just thinking about you
Posted by Himitsu at 6:34 PM 1 comment:

A collection of all my Riko-riko avatars~

I love her so much, my new waifu~
Posted by Himitsu at 9:41 AM No comments:

Afterthoughts will be a new tag for deep thinking after a major issue, set soon to run semi-regularly with Himitsu's blog.

So, he is dead, the big evil that is Osama bin Laden.

Now we need to start thinking about what to do after.

It is quite a pain really. 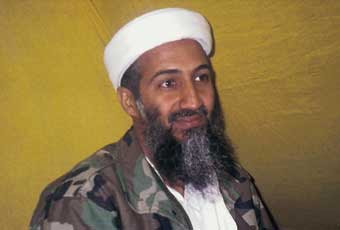 The US needed to eliminate Osama to fulfill a sense of justice and to a lesser extent to end the myth of his seemingly immortal threat and invincibility. Perhaps all too much that leads to 10 years of fruitless efforts and all of a sudden there he was shot in the head, dead.
But then dropping his body into the sea, not making a default shrine of some sort does not legitimately end his reign, or his organization’s Al Qaeda’s grasp on terrorism. It is merely a default of a kind, a mere sign at best. Will it spur his supporters about? One can only hope not.

Often forgotten amid the ugly violence of Al Qaeda’s attacks was the terrorists’ declared goal to replace existing governments in the Muslim world with religiously pure Islamist states and eventually restore an Islamic caliphate. High on their list of to do’s was Egypt’s Hosni Mubarak, whom was already removed by peaceful bloodless means.
Thus even before Bun Laden death’s, and now without him, one may presume that Al Qaeda (henceforth reference to as AQ) has been operating fine without Bin Laden’s direct influence of directions the group shall undertake. It was as though he were a figurehead and that he is only able to lead if only being led. With his death, we must begin to pry deeper, asking questions like ‘how relevant was he to an organization that is so ‘hydra-esque’ where one head is cut and another two shall replace and twice as fierce?’ One must start asking the questions how relevant is it a time-beaten old man hiding and unarmed in a compound in Pakistan now killed be to the American purpose? Is it relief? Or some kind of inside victory wont that needed to be satisfied?

However, rejoice is abound, after all, the nightmare that took a decade to resolve has been done. Justice has been served, and the people of the US, the world that witnessed the horror that was Sept. 11 can now absolve a guilt that they weren’t there to help, if there was such a guilt. They can finally put it behind them, to move on from the clouded nightmare that once shaded their eyes.

However, such rejoicing would be premature, to think AQ is now dead in the water, or dead even with Osama now gone is tempting as it is naïve. To many Islamic ideologues, the Arab Spring merely resembled the removal of obstacles that stood in the way of establishing aforementioned Islamic caliphate. Their goal has not changed, with or without him, the organization is steadfastly independent. Just as how Osama has guided and designed it, without him, the group would simply mourn him, perhaps if necessary be, or rejoice at the a new and more intensely focused mission to establish their presence and power as unprecedented from here forth. Their goal hasn’t changed, their ability to use terrorism, and willingness to employ the means of terrorism to ensure the success of their ultimate goal has not budged. They merely flourished even, to say the least now that he has been made a Martyr. 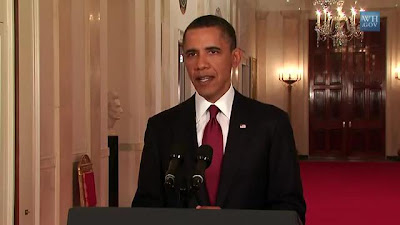 In the months ahead, Osama’s death may encourage AQ to stage an attack to counter the impression that it is out of business. The more significant threat, and immediate to be said the least will come from its local affiliates. Osama and his deputies have designed AQ to function as a network of groups that could largely operate independently to attack their enemy, perhaps the US, and now perhaps even the world. Once in place, the network already has no need for Osama, and this needlessness could have been established long before the 80s, or 90s. One can only wonder if this relevance of Osama, so purported as the all evil face of America’s most wanted; be at all the image of AQ’s prime operative. Is it that his face represents AQ? Or is it that AQ merely uses his face?

Either way, in many Muslim societies, there remains a radical stratum born of a sense of victimization by the West, fueled by the inefficient and corrupt governments and carried forward by an enormous youth population. AQ was and is simply a pressure valve and from an early form of connective social media avidly controlled by the country’s leadership; allowed the expression and growth of young and able jihadists to form and function. Those who are fed up by the corruption of their government to and those who believe that their religion requires the absolute sacrifice of any sanctified peacemaking, and thorough acts of violence against the nonbelievers only strengthen through such channels.

They will concrete themselves with such ideas. They shall fundamentally believe that violence is the way. Refusing to renounce violence as a means to an end and refusing to accept more democracy (even if it isn’t suitable case by case basis) that is offered to be established, less corrupt regimes will all form an umbrella for the establishment of the caliphate.

Just because one does not always know the identities of their leaders or see a named and hierarchical organization does not mean that the Islamists extremists are not working hard to seize the fruits of the Arab Spring. The challenge for the US is not merely to take advantage of the intelligence gained from the Pakistan raid that ended Osama, but to assist moderate Muslims to establish creating a counterweight to violent extremism. With both an appealing articulated ideology and effective organizational structure, the US may achieve just that. (that is, provided that the US does not put the foot into the wrong dialogues and establish their dominance over their culture as they have been performing thus far.)

The government that was overthrown in Egypt was corrupt and feckless as are the regimes that are now under siege such as Libya. Groups have poised to take advantage of the situation of this upheaval are mostly strong supporters of Osama’s view on repressive religious rule. The similar conditions and situations exist in Afghanistan and Pakistan making it very difficult for the US to put their presence there and if they do, it will become a structure of poison that will soon leak into the minds of the people who resent the American presence. The words rang true for the Islamists, and those who support them will find themselves too supported by them in the group, using strong words and stronger grip on what they purpose for, the average Muslim man may just be spurred into action to take their side.

But, is it sides that become the balancing act? Is it even relevant to discuss taking of sides when one is an average Muslim man, seeking perhaps some kind of freedom from the corrupt and incapable government, seeking a voice that vents that anger that has accumulated from repressive, and victimized lifestyles? Or is it that a man may know what serve him best? And in turn, serve the very function AQ sought out to employ?

Moderate, tolerant and even some secular groups exist, but they often do not have a comprehensive alternative vision, or how to communicate it or have the organizational skills to promote their secular vision. The US and European experts can engage to assist, but not form their arguments into the base of their ideologies into them. They can assist to build the politically achievable and viable organizations but to succeed these new groups must be homegrown and tap into the Arab and Islamic traditions. The mere installation as it was with Afghanistan’s president as before and after the war was considered done by the Bush administration demonstrate how short-termed their selected candidates can be useful. It must speak the Arabian voice, voice the Arabian concern and connect the Arabian world.

Moreover, without investment to create jobs, new governments in these countries will fail under the weight of their predecessor’s problem: youth unemployment. Unless the corruption is replaced with efficiency, investment will either not materialize or be wasted and without alternative movements with vision and appeal, the ability to deliver change can be only so limited. Obama was voted to come with Change, but can change be mobilized? That does indeed, depend on the future routes. 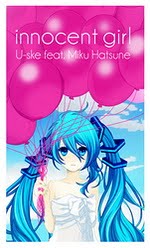 Himitsu
Magic Town, Used to be London, United Kingdom
Saite - worst/bad person. As you can see, I am that much so, stuff I posted here is meant to make rants on real things and real life. Not that I have one, but erm... yeah I also go by the name Mariya Shidou on the chan boards, Omni to some forums, and Anonymous-fairy on Shrinemaiden, _Ink on Club Bleach forums.